In The Garden Essays on Nature and Growing

It is a dark grey day here; the wind freezes my extremities as I plant on my carefully loved and tended to “Love- In – A Mist” also known as Nigella Damascena but my five year old loves calling it by its more amusing name. I even have a video of him singing a song he had made up in homage to it. Returning to this morning where the sun was brief and passed rapidly, I walked up and down the swerving stone garden path to the compost, filling my pots and placing a dibber gently in to retrieve a seedling, roots and all ever so slowly and gently as if diffusing a bomb. One tear and the whole thing could die. I slowly lower each seedling into a separate pot where it finally has its own space and I hold hope it will double in size before placing it in the bed where it will have to fend for itself from the slugs and snails that rule the garden. I now have a puppy whippet chasing my feet, looking up in shock and disapproval when the wind blows before proceeding with his assassination attempt on my unopened tulips. I now have a small vase on the dining table containing the ripped heads and flattened stalks. It’s a tulip graveyard. This is where I find myself most mornings, if not in the morning then the afternoon, reconnecting, reassessing, re-rooting. 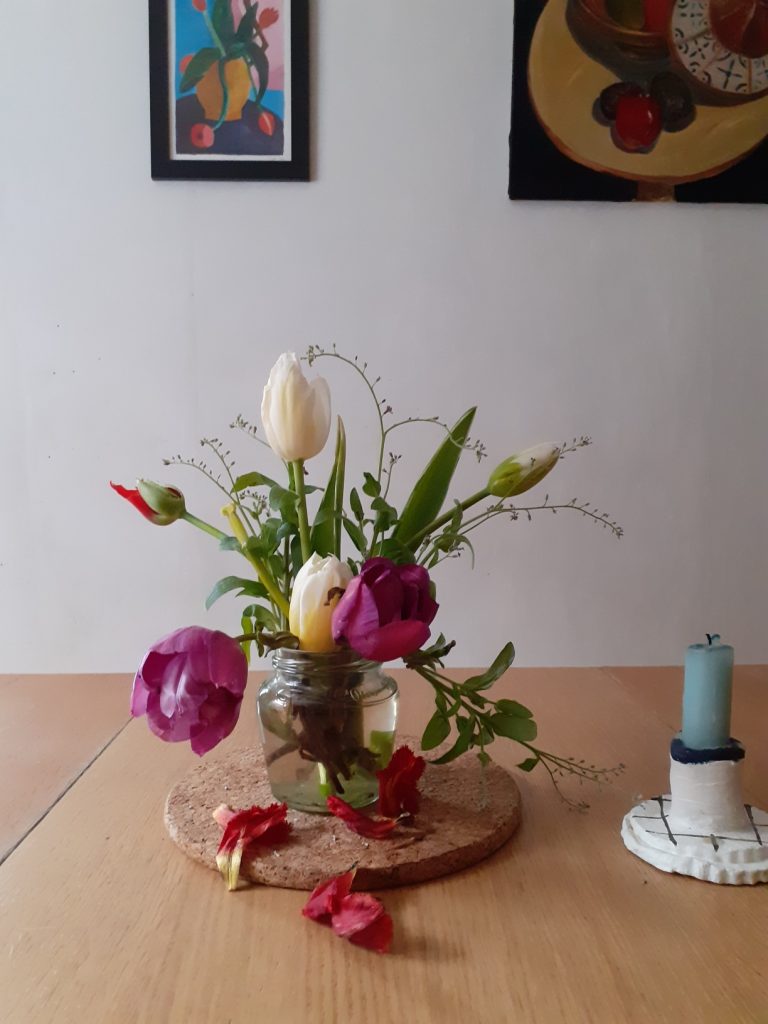 I search through my instagram feed to march 2020 when Covid brought the world to a close. Where we all cried and panicked in our private squares much like that of instagram. We were all doing it in unison; apart but together. Many of us retreated to our gardens where we had a little control. Every morning I woke up and read an entry or two of Jarman’s Modern Nature whilst my husband prepared the kid’s breakfasts. I wrote about how I took solace in my winter cabbage and quickly sowed chard and spinach, I was scared that I didn’t know enough to feed us if Armageddon happened. Turned out I would have failed as the raised bed (first attempt at no dig) had bark that let everything come through wonky then eaten away by the slugs but then I had the most wonderful , gorgeous chard make its way through. I netted the area, a barricade then stuck copper tape all the way around the bed and one day I woke up and it had been eaten in all its beauty. To put your heart into growing something is to believe in faith & magic even when you know the whole time it can be full of hurt and disappointment. I did at least succeed in courgettes and was relieved to see many of us had suffered with leaf mould, it was the weather but I could see we were all suffering the same plight together. 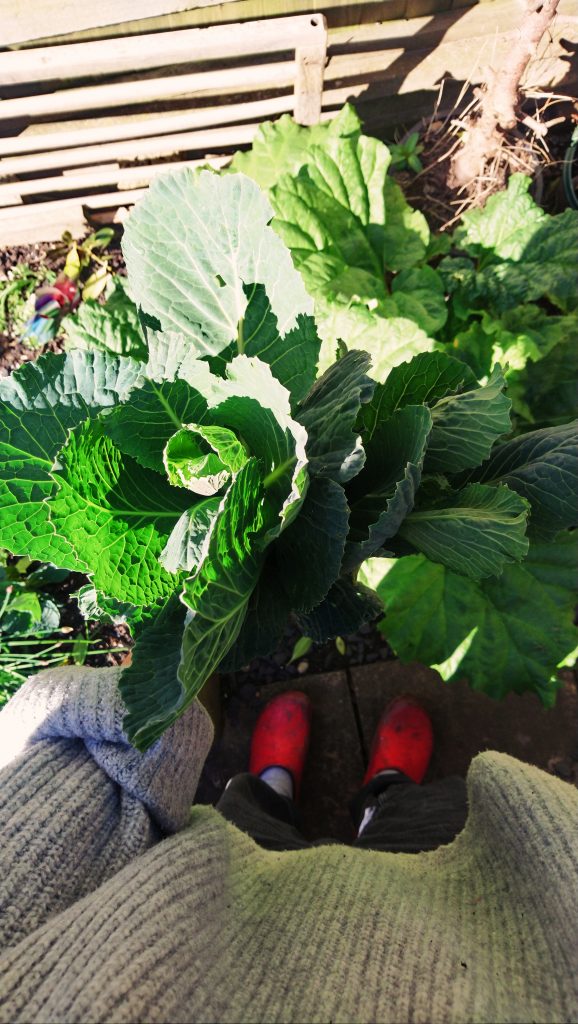 Many of these memories came flooding back when I read these essays. I read so many stories from my own life played out within theirs. The garden holds a cornucopia of life, not just the things you grow in them but your very own. You are told and share secrets with friend’s or loved ones there, you run there when you need to cry, when you need a breather, when you need to still the mind. Penelope Lively’s piece titled ‘The Garden Remembered ‘drew on the genetic compulsion to garden in her family through the generations and the sense of urgency to garden moving from her grandmother to her. This is a concept I wrote about when I was invited on instagram to discuss lockdown gardening in under four-hundred words , I wrote, “ My love for gardening has a few roots which branch from two sources. First is my grandmother whom I share a name with and never met, who according to my mum would go to the garden in the morning and return late red cheeked from a day’s work. In Cyprus she hatched butterflies for silk to turn into thread. In England she grew Mediterranean herbs such as flat leaf parsley & mint to garnish Turkish cuisine. She grew spinach & beets to mix into black eyed bean salad, tomatoes, potatoes, garlic & courgette. When I garden I am gardening with her, we are bent over the soil shoulder to shoulder.’ This urgency to connect with land and family runs throughout a number of these essays. Lively teaches us that gardening is about embracing change as she moves from her large country garden to her urbane concrete one in which she embraces growing in pots. She writes about how communal garden spaces in the time of Corona filled up and suddenly different species of birds could be seen and heard. Nature began to shout.

A somewhat romantic image of the garden is conjured up in Nigel Slater’s ‘Coming of Age’ essay in which he expands on the concept of change. Gardens are creative spaces and Slater approaches his as a writer where he wishes to construct a thinking space to ‘…untangle a knotted sentence.’ He has created a space (as seen on instagram- it is exquisite) in which he can escape and stir his imagination whilst creating a habitat for wildlife. Slater writes of this Eden he has created but also of the things that break it; first the foxes, then the box blight which breaks the backbone of his garden but with the death of his box hedges there is a birth and renewal of what is next and that is all it takes to restore everything once more. He learns that he needs to let go of what no longer serves him. He writes, ‘I learned quite quickly that every disaster in the garden is an opportunity in disguise.’
Francesca Wade writes about communal land in her essay titled ‘A common inheritance’ in which she discusses the movement of green spaces being hoarded by the privileged and being returned once more whilst Jon Bay writes about gardening within a community in ‘Companion Planting’. He writes about the beauty in shared land in which a space is created in order to feed one another creating a connection with the earth as well as each other, I felt this when I got to work beside a group of women working on a sensory garden for my daughter’s school in London, working together and taking care of it meant a great deal. We were doing something good; we were giving our hearts to the children who would benefit from our toil.

We are invited to look at a different kind of gardening by Paul Mendez in ‘The Earth I inherit’ in which a garden can act as a camouflage ,a place of enhanced threat or a place of disconnect. Mendez is a writer who creates a story in which a self-taught gardener creates a strong scented rose garden in order to mask his Jamaican cooking and Jasmine to obliterate the smell of the gasworks but his garden is vandalised because of jealousy and racism. The story was based on his grandparent’s experience when they arrived to the UK in the late fifties. When the reality of their move became apparent, their garden became their place of solace. Unlike his grandparents, his parents went out off their way to not draw attention to their garden and therefore their cultural differences and so he was forced to maintain order in the garden, it was no longer an extension of his identity. Mendez writes of his grandmother, ‘When she died, I felt the loss on multiple levels: the loss of her; her cooking; her home; her link to Jamaica. I’ve never been, and nor have my parents, and so I felt permanently dissociated from my heritage.’
This compilation of essays unravels a complex world in which people find comfort in nature. Some find others and some find themselves. Every human emotion is played out within these pages. Allotments become fortresses, sanctuaries and classrooms where strangers learn and share with one another. Gardens can be creative spaces through observation and artistic hand and eye. Gardens teach patience and hope even when both become extinguished. Plants hold a secret language, they can be found in literature, you only have to look to Shakespeare or Derek Jarman who loved delving into the history of flowers. Modern Nature is littered with the poetry of plants and herbs. To have a garden or the privilege to garden is not available to everyone; the pandemic has taught us this. Not everyone can be rooted when they need to be.

The garden splits time. It holds immediacy but also the future all in one breath as you envisage that seed’s future in the palm of your hand. Fourteen writers connect through the pages like a tangle of roots under a forest floor, not in competition but in companionship.