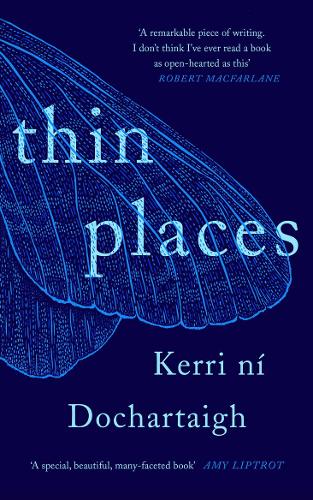 Here is a story of darkness which holds a web of cracks that light their way through. You may envision Leonard Cohen singing this clearly in ‘Anthem’, or picture a Japanese vase held together by golden threads of glue or you may say it belongs to Kerri NÍ Docharteigh’s Thin Places and it is not a story, it is her life. What permeates through this life of political division, of broken people, of death and hatred, is that of nature. The beautiful and the sublime- the sublime which holds danger in its palm of beauty with all of its wildness threatening to take over which it nearly does many a time. It is not only the natural world which grows upon our page like ivy spreading from the page we turn to the next but also the dropping of a veil. The veil is thin which separates us from the other side, a ‘threshold’, a ‘liminal’ space which Kerri nÍ Dochartaigh’s grandfather taught her about. This veil can be felt in certain spaces according to Irish folklore.  Kerri nÍ Dochartaigh writes, ‘Places where a veil is lifted and light streams in, where you see a boundary between worlds disappear right before your eyes, places where you are allowed to cross any borders where borders and boundaries hold no sway…all is as it should be for that flickering gap in time.’

Kerri nÍ Dochartaigh writes about the world she grew up in and its history which feel like the remnants of relics. NÍ Dochartaigh recounts life during the troubles, about a land where borders are not just thin but also thick and made of violence, this seeking of thin places is a necessity.  With a Catholic mother and a Protestant father Kerri nÍ Dochartaigh cannot settle on a side without angering  the other but it is the moth, the Hooper  swan ,  the wren ,  flora and fauna  that do not choose a side to belong , they are a comfort as they break through and see no boundary.  NÍ Dochartaigh tries to grasp a hold of her language which had gotten lost and begins to name these creatures in her native tongue, evoking them on the page to life as if by lamentation. Her work is poetic, visceral and stands out as did her broad Derry accent which was mocked in Cork by her colleagues.

Kerri nÍ Dochartaigh tells us the story of her land and the sea that surrounds it, of her people who were displaced by poverty and violence and so had to seek out other lands. When Kerri nÍ Dochartaigh finds the chance to escape, she discovers herself being drawn to the wild places; bodies of water offer medicinal salves as do forests and climbing atop mountains.  Her story is not only about nature and the constant sense of not fitting in, it is also about loss and scars. Loss of a friend to a horrific murder, loss of friends to suicide and alcohol abuse. Then the pain that sets in her own body, deep in her own bones and memory, drawing her steadily toward alcohol and suicide attempts.  Her darkness reveals itself in the form of a dark crow- a sinister presence not unlike the crow in Porter’s Grief is the Thing with Feathers. The wings of Kerri nÍ Dochartaigh ‘s crow can be felt casting a shadow upon the words we read. Its physical manifestation is both terrifying and real.

Thin Places is a harrowing read. It is emotionally intense, it is beauty wrapped in pain then in beauty again. It is about strength, it is about survival. She is a survivor. Reading Kerri nÍ Dochartaigh is like reading an old text from another time that has been forgotten. It is a text written from the other side of the veil. When she later finds herself in a relationship which she tries to sabotage, she finds herself being held by its strong boundary. They visit a cottage where they will eventually live but her first visit to this dilapidated cottage in the middle of nowhere almost swallows her whole. She finds herself following a peacock butterfly down a path when the ‘whole middle section of the decking gave way completely, the damp wood dragging me down towards the rich soil.’ Was this butterfly a messenger? Was the house claiming her and telling her ‘you are home’? This is a strong physical image; it is abrupt and jolts her back into her own body and place.

Kerri nÍ Dochartaigh’s strength is in the unearthing of light through all of the darkness. To read this is to wade through water, to stumble through thick bogs, to see the colours on a moth’s wing and take to the sky. Although this tale holds a lot of death, it is in fact full of life.  It is life.