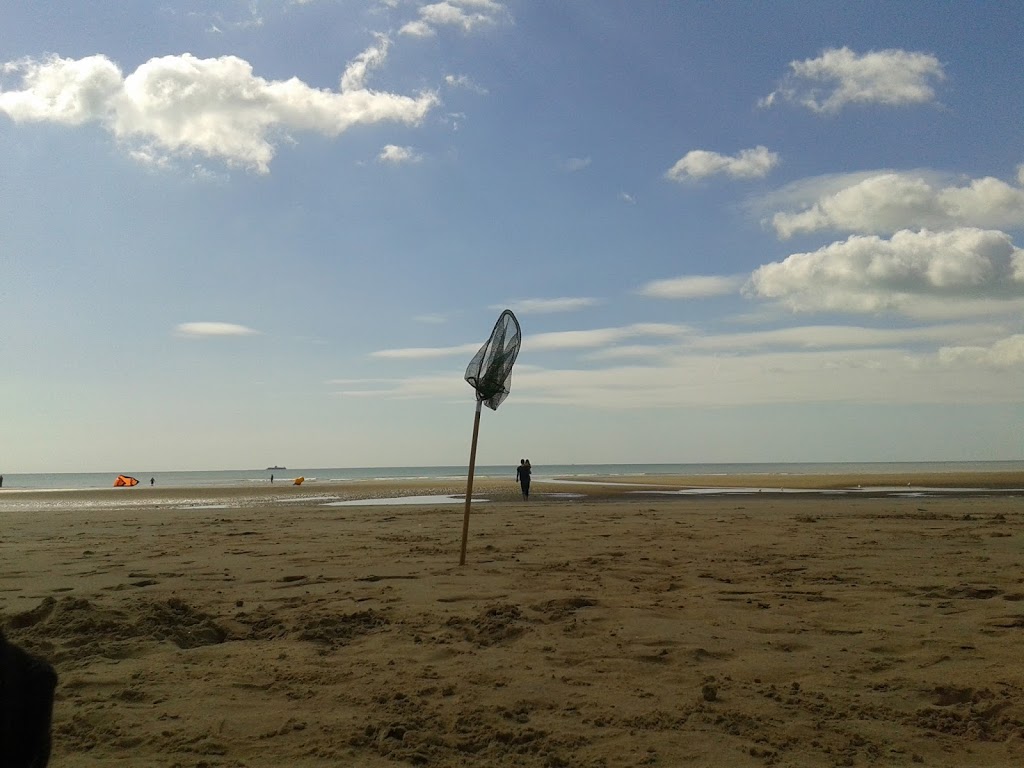 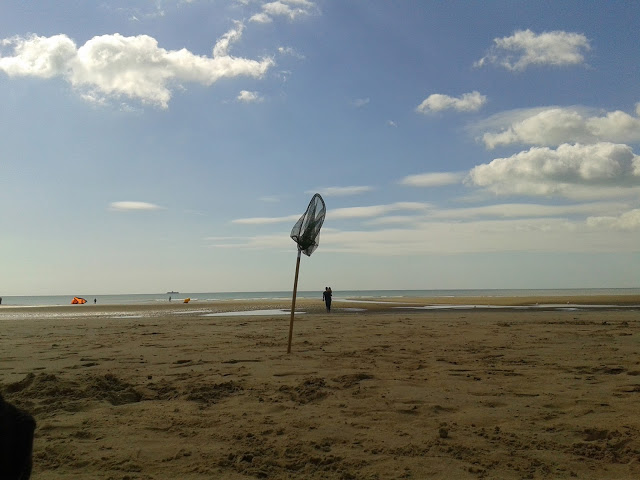 I’ve returned. Returned from a magical holiday in Sussex where we stayed on a little farm with an orchard, twenty minutes away from two seaside locations and I have to tell you, it has reignited a great wildness in my heart. Every evening after our dinner as the farmers packed up their day’s labour Ayla asked for “orchard” never had red ruby spheres brought such joy to her as she pointed out the cooking apples from the eating ones and crunched on apples she had picked herself. As sheep grazed then scattered from beneath the trees, the sun would slowly set amongst the old gnarled trees, some upright, many bent and a few upturned at the root, all casting dark sinister shadows as the light changed.

Many days were spent at the beach, as many as possible, in leggings, waders, then nothing as the day warmed up. We collected a copious amount of rocks; shells, seaweed, ogled at crabs and jellified lobsters. It was perfect, just perfect. If only every week could hold a trip to the sea or the orchard. If only.

No listen here, have you heard of the concept of re-wilding? you probably have by now. I recently read “30 Days of Rewilding- Find Your Place in Nature and Watch Your Family Bloom” by Lucy Aitkenread, my favourite champion of freeing our children and embracing the natural world beyond us. She writes about the importance of nature for ourselves, our children and as a family as a whole. Whilst reading this cleverly constructed book which is made of thirty short chapters with a busy parent in mind, I began  to note how I have in fact been going down the same route myself for a long while and how I’ve included my child. I just didn’t know it had a name. It is a brilliant book, full of the “doable” nothing can not be attained, you just need your bodies, your hearts and plunge in. 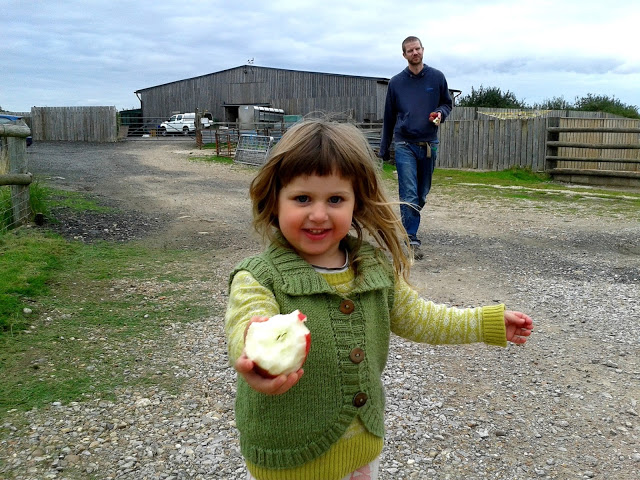 I’ve lost count of how many times I have written over the years of my love/hate  (mainly hate) relationship with London. A multitude a reckon. I’m a misanthropic with a deep love for a close knit community if that makes any sense at all. I’ve always felt myself lost it its vastness and felt stifled in all it’s grey and so for a good seven years now I’ve worked hard on being  surrounded by green. From the bursting to the brim amount of green foliage in the house to living out most of my days in parks and woods. I should have become a professional gardener!

Many times, before we embarked on the great adventure that is parenthood, I would simply jump on a train and make a day trip to the countryside and have my fill. To surround myself in the vastness of green rolling hills which met a colossal sky; people were swapped for bleating sheep, buildings for trees, cars for tractors and pavement for muddy tracks. The pace of my heart would hasten and my breath heavy with new air pumping through my lungs would fill my brain and limbs, igniting a new zest for life. Then rest.  A cheese and pickle sandwich on the grass with the husband and a conversation about moving away from the city which had too much.

The woods are a great escape, there is something utterly thrilling about being surrounded by ancient trees which reach beyond you as a person in all measure. I’ve always observed the seasons, collecting treasures from it since I was a small child on my bike with stabilizers collecting conkers in the box attached. In the woods, I note how the ground and sky change. The ground brings thick oozing mud after torrential rain, or hard and cracked in the summer but my favourite is when it is lined by a thick carpet of red and golden leaves in the autumn. Many of my books hold a leaf, a habit I picked up as girl from my own father who is as sentimental as I am in such aspects. Being swallowed by the season rather than human drama which is unavoidable but possible to escape and reconfigure for a short while is usually found once outside. 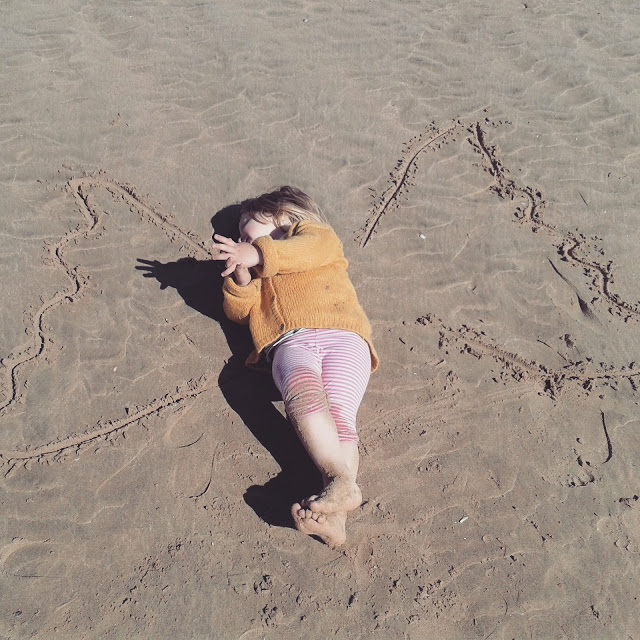 On becoming a mother and plunging into the Wild.

It all began from a very young age, particularly at school; this overwhelming sense of imprisonment behind classroom doors and windows that sometimes felt too high to see out of. I’m probably exaggerating but that’s how it felt. This claustrophobia followed me out of the school gate with such an intensity that a trip to the park on the weekend offered no real remedy and so escape into fiction in the inner sanctum of a house was my greatest escape. It took becoming a mother to really understand that I wanted my daughter to feel grounded by having a deep connection with nature for it was in my throes of depression at fifteen then again in my early twenties that I found separating myself from people and plunging into gardening , soil under my nails in the cold or sweating in the sun, that I felt like myself the most. I want my daughter to find solace in these simple things when life gets her down, because it will, it is inevitable. But I hope she will have the tools to swiftly dig herself out.

From three weeks old, I consciously decided to continue a part time job dog walking- something I used to balance my indoor writing job which kept me chained stiffly to a desk. And so, with a baby strapped to my chest, first in a soft wrap then a stronger one later to bear her growing weight, in the cold of winter, we ventured out. I became obsessed with her having a daily dose of fresh air no matter what the weather flung at us. One of the first words I taught her was “tree”. In the sling, we both pressed our hands against it’s ridged bark and mouthed tree , craning our necks to watch it meet the sky. This is where her love of nature was born. 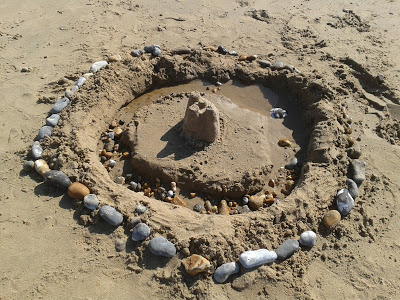 Returning to Lucy’s wonderfully clever book, here are a few things we do in our life that Lucy brings to light.

I’ve involved Ayla in Gardening since she could walk mainly watering and showing her which weeds to pull out, digging and identifying flowers. I also put her in charge of certain flowers such as the marigolds in her grandpa’s garden, the flower on her desk and and potted plants we have in the garden. She’s learnt a lot about growth and death through the garden. She is in fact able to identify more flowers and birds than her father (I’m pretty pretty proud of this) 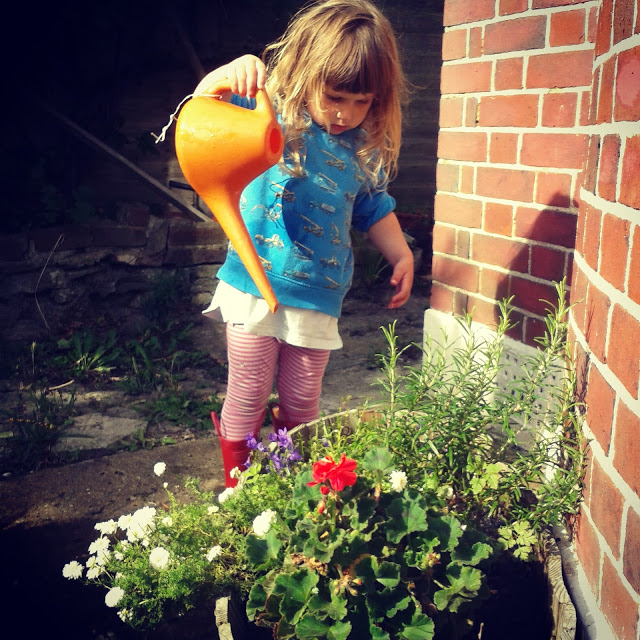 We’ve gone to a few nature group sessions in our local woods and need to do it far more often, if only it wasn’t up a huge huge hill and she still fitted into the boba on my back! alas, she now reaches my waist as I am tiny so need to find another way. But the Woods are wonderful for encouraging imaginative play (doesn’t need much encouragement) and for sharing a meal with like minded earthy people.

From noting the leaves turn, then collecting them to make a garland to knowing when it’s daisy season, buttercup season etc, we note the changes and chat about it. the real fun is dandelion season, we have to stop at nearly all of them, even when she is on the cusp of sleep. I’ve also often chanted at her at how wonderful the rain is, even when we’ve had days and days of it. I would say, “oh gosh, still raining! it’s going to rain all day” to which she always replies “it’s good for the garden mummy, it makes everything grow” and my mindset changes once more. 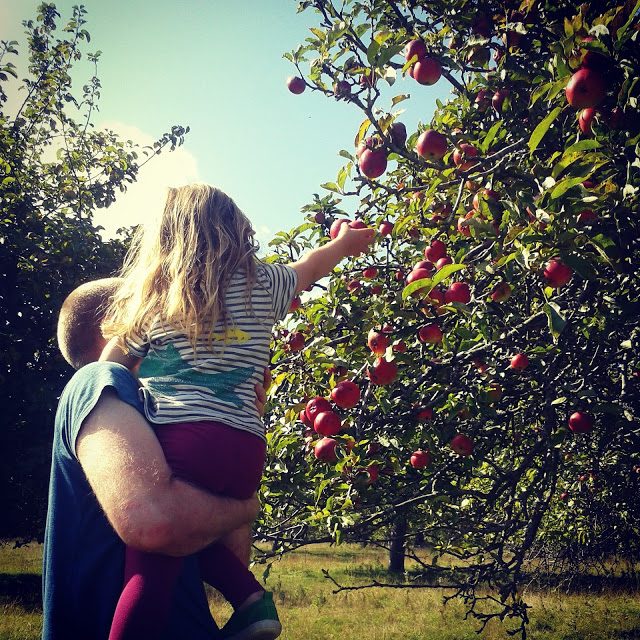 I bought Ayla a waterproof romper from an early age so she could always fulfil the need to splash in the deepest muddiest puddles. I’d chuck it under the pram and pull it out when she got the urge, much to other parent’s consternation when their children wanted to fallow suit, unprepared.

Mud is also lots of fun, I don’t think I was allowed to play in it much myself but I encourage it when we are in the garden where I’ve left a bed of soil for her to call her own. She collects stones, moves them from one pot to another, waters the patch and makes a beautiful mess. Soil makes you happy, it’s been scientifically proven! 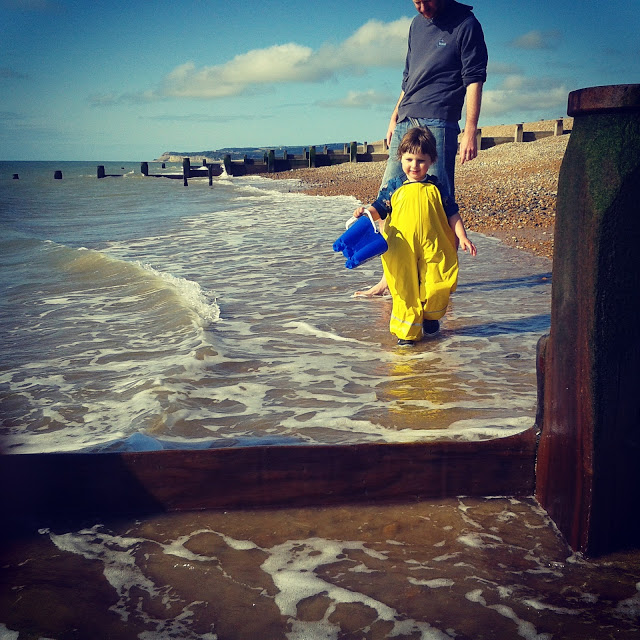 I want our child to love our planet, if she loves the planet, she will take over in looking after it. We recycle together, careful what chemicals we use, always saying, oh no, this is bad for our earth, lets find an alternative. This sounds hippy dippy, but what harm is there in trying to tread more carefully?

There are many more wonderful things covered in this book, my only regret is that we haven’t gone camping yet and that I don’t really have a good supportive mother group and its my own fault, remember I’m a wee bit misanthropic who tends to wonder away from mother groups, but that’s because I need to find one where my values are shared and that’s a bit hard to find sometimes. Thank god for instagram and the lovely mums I get support from there!.

And so, that was a lengthy post indeed! My wish is to go more “wild” really plunge into what makes us all happy and have more adventures. How about you? How will you rewild your family?

I know I rarely write here, I struggle to find energy left in my reserves after a day of being somewhat wild but it doesn’t help that I barely sleep at 5 months pregnant! Yes, pregnant for those of you who don’t follow me on instagram! That’s how long I’ve been away from here. But knowing we have a growing family has made me more determined to get this right, to build a happy family and doing all of the above is a beginning. 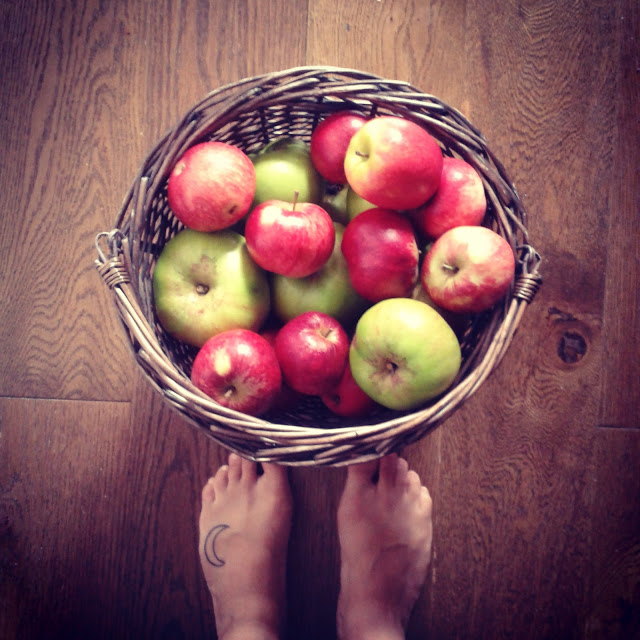