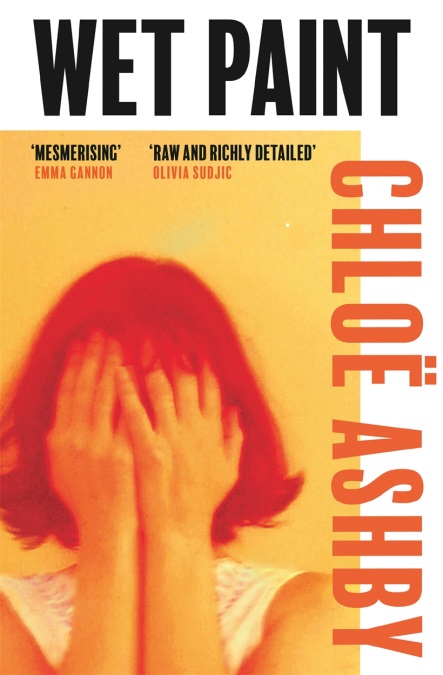 ‘I edge closer until I’m standing directly in front of the painting, the largest in the room…Eyes gliding across the canvas, I fiddle with the beads again, slipping one into my mouth. Hail Mary.’  Even if you do not know the artist’s name or title of the painting, Manet’s A Bar at Folies – Bergѐs is likely to have crossed your path at some point. It may have been whilst flicking through a book or maybe your art teacher at school flashed it once before your eyes when you were studying impressionism or maybe you simply glanced at it whilst mindlessly scrolling through channels on the television. For Eve, Ashby’s protagonist in her debut novel, Wet Paint this painting which she visits every Wednesday without fail, is an anchor. Ashby has placed this painting, which is housed at The Courtauld, at the centre of her story and its melancholic image resonates throughout the text as an entity that cannot be ignored.

Wet Paint tells the story of twenty-six-year-old Eve who appears to be doing okay and gliding along in life when in fact she is barely holding everything together with several coping strategies in place to get her through the day; detaching herself from any meaningful relationship is one of them and visiting the painting is another. This all changes one day when she sees the parents of her best friend who had died a few years back. This reunion triggers something in her which begins to crumble away her defence system.

So, what is the significance of Manet’s painting? Most of the canvas is taken up by the figure of a barmaid named Suzon, her evocative stare fills us with curiosity as Eve tries to ‘concentrate on what bothers me: what’s she thinking?’ It is a bit like the riddle behind the Mona Lisa smile.  Her look could be one of apathy or exhaustion as she stands still amongst movement and bright lights creating an uncanny sense of claustrophobia. Her body is voluminous, cinched in at the waist whilst her breasts threaten to spill out from above her low neckline as though the contained may break free. The painting reminds the viewer of how easy it is to become lost in the noise or buried, as is the case for Eve.

Heat emanates from within the canvas as lights and bodies fill in the chaotic background we can see from the large gilt mirror behind her, doubling herself and giving us a flash of a customer (possibly Manet) but the reflection is not accurate, bodies are angled imprecisely, things are not as they seem. Eve is not who she seems, like the barmaid, the outside is that of a carapace which gives nothing away, a bit like a poker face. Beneath Eve’s unflinching façade is a well of grief and abandonment leaving her open to those wishing to inflict their ill will upon.

It is not a surprise that it is the men in Eve’s life who are causing waves; from her roommate Bill who ‘likes to start a conversation when I’m wrapped in a towel’, the customer who thinks it is ok to touch her, her alcoholic father and then there is Paul the art teacher. Ashby skilfully weaves an interlocking thread between Suzon in the painting and Eve’s life which appears to be at the mercy of the male gaze and male privilege. Yet this is not all, there is an uncanny auditory echo between the painting itself and the turmoil unravelling within Eve.  Suzon stands still amid all this movement and noise as if she has been pinned, which of course she has been by Manet who is painting her, but there she is suspended behind the bar which seems to be the only solid object between herself and Eve who stands before this painting or sits on the floor in front of her Suzon, tuning out the noise of other people in the gallery around her. She too has been pinned by Manet.

When Eve loses her job, she finds courage and takes on a job as a life- model like Suzon before her. There is bravery in exposing the flesh, but this exposure only hides and diverts one’s attention from what may be occurring beneath the surface. When Paul takes advantage of Eve, our attention is drawn towards the relationship between the model and artist, and we know that throughout history that male artists slept with their models either through seduction or through the play of power in which the artist can fulfil his egotistic image of himself in order to fulfil his urges and lusts. As Eve’s life begins to implode then explode, we slowly gather shreds of her past through flashbacks and begin to understand the root cause of her vulnerability.

Ashby’s use of language is rapturously physical; Eve is always ‘picking’ at herself, ‘pulling’ at her cuticles, ‘snapping’, standing up then sitting back down again. Her body is a site of anxiety and discomfort. Marks of her uneasiness are written upon her body, ‘…little white scars caused by picking nails. I was an anxious child.’ Her skin flakes away as she begins to feel more unhinged and then there is the scratching from the chemicals she uses to clean the flat for cheaper rent, everything in her life is causing her some form of physical damage yet there are moments of comedy, albeit a form of dark comedy.

Wet Paint is an intelligently crafted novel with a plot that reaches down into depths of darkness and light like that of a multi layered painting upon a canvas and just as the angles in the painting make very little sense, Eve’s life is also angular, dizzying, broken up and jagged. Ashby has made it clear that art is not a passive experience but one that can reflect our own emotions, that can soothe or bring things to light.