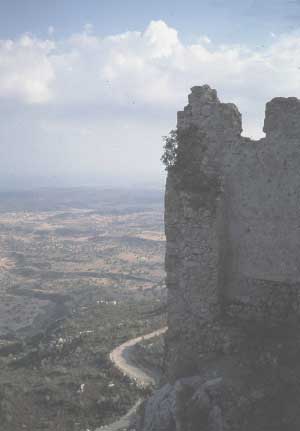 My clearest memory of Cyprus before last year was when I was fifteen; memories that were fully charged by smells, sounds and sights. I remembered the smell of the Jasmine plant in the breeze at night and early in the morning as the sun rose. I recalled the refreshing walks at midnight whilst enjoying my cold dondurma as the island came to life again after the afternoon siesta. I remembered sitting with my sister outside the lahmajun shop whilst my grandfather bought our dinner, and resting outside with the family as neighbor’s passed by offering snippets of conversation.

Among the arid heat, the dry yellow and green land, there was always shade under an old tree and water not too far to swim in; these were the experiences that sustained me and stayed with me until I returned.

Our return was in September 2009 to Nicosia then Magosa. The land had changed; flats were being built in every conceivable plot but the people hadn’t changed. The figs tasted as beautiful as I remembered; the lemon season had ended so we drank mandarin juice as we sat in the shade under the vines talking and laughing at ease as we waited for a cool breeze to sweep past us. At first it felt as though everything was either going too fast or too slow, but somehow one was able to slot themselves into the rhythm. The beauty of Cyprus, did not lay only in the kindness of strangers when help was needed, or the beautiful mountains which rose up and out of the land, nor was it the beautiful food and glorious sun; it was the land entirely. From the land grew exotic life; hardy plants, made to endure the high temperatures and the unrelenting sun from which creatures dug their holes to burrow in until the earth had cooled.
The sun’s rays were immense as they penetrated the ground and every living organism which walked and swam upon it, but the body somehow adapted to it rapidly. As our minds and senses synchronize with the sun, we suddenly become aware of its importance. One finds that they rise with the sun and rest as it falls and in essence, it is as though you become one with nature itself and can feel the vibrations of the island’s heart beat.

Everything felt different; I remembered sitting still on my grandfather’s balcony, hiding from the shade and lifting my face to the sky, noting the different smells, I thought that it smelt like the colour yellow. As the sun set, I stood back in bewilderment at the sun’s colossal power descending into the earth, slowly at first, then rapidly. At night the moon was brighter and the craters clearer as I listened to the land come to life once more for one final instant before it too had to rest in preparation for the next day. Nicosia’s bustle in the morning and bustle at night hummed in my ears, along with the men that gathered to sit outside the florist to listen to music and play backgammon; it remained a hyper city until you felt’s its ease when you accidently awoke at three in the morning.

As I eased myself into a different life, I sat back and allowed the land to accept me; it wasn’t too difficult to accept it in turn. It was not hard to see that everything was attainable as long as one had compassion and a common understanding with the land that they felt humbled to walk upon, for it was a land fit for kings.