The Graduate By Charles Webb 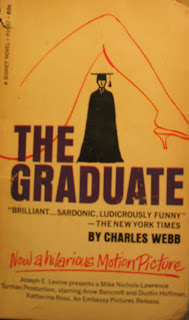 Literature │ And Here’s to You Mrs. Robinson

The Graduate by Charles Web
The Graduate, written by Charles Webb (1963) became a cult classic when it was turned into a film in 1967, starring Dustin Hoffman and Anne Bancroft, accompanied by the even more famous soundtrack by the “Simon & Garfunkel”, in my eyes, the book unfortunately had a lot of living up to do, as I had watched the film many years ago, and many times more since.

The story depicts the painful confusion in which one goes through when one stops to think about what it is that they really want to do with their lives next. Does one continue even further within the education system, adding to the letters after their name in a field that they have no real interest in, or worst, have a great interest in at first but realize it’s all been a terrible mistake? Or do they continue with the education system for the wrong reasons, to be cushioned within it, receiving unusable tools that have no use in the real world? Does one go out there into the big wide world in order to gain some insight into what is actually out there? These are the questions on Benjamin Braddock’s mind. It is during this time of confusion and expectant pressure from his parents that he becomes carried away in these moments of loneliness and confusion that he begins an affair with an older woman, in which his life begins to spiral haplessly out of control.

The Graduate was Webb’s first and most well known novel which was a semi-autobiographical account of Webb’s own affair with an older woman. The writing itself is not terribly exciting, in fact, at first its dry humour is rather off-putting, but this may be the writer’s intention, but it’s at the cost of making the reading experience, less enjoyable. What the novel achieves with a strong sardonic overtone, are the societal and parental pressures that are placed upon the young. Along with such expectations there is a simultaneous sense of loss, the loss of childhood, and the loss of freedom, especially now that the tax man is after your pocket. However, the most terrifying aspect of this petrifying transition from youth to adulthood is the constant fear of making the wrong choice and the strong sense that everything is becoming so very final. It would be foolish to not read this novel in the context of it’s time, as we know, it has become easier and more common to dip one’s feet into a number of careers and paths for example, you can be a teacher well into your thirties, only to take up radiography later on, and so forth in that vein.

For the most part of this novel, the pages are littered with dialogue, making it clear to see, how easy it was to adapt the novel into a script. The language is terribly ambivalent and controlled, making it hard to see the true undercurrent of emotions being experienced by Benjamin. It’s a true shame, but it is easy to understand why some find the novel to be an inferior form of medium to the film, and it’s very likely to be due to Webb’s deflated text. However, once more, one can’t help but feel that such a deflated text is terribly deliberate, as it mirrors the subject content quite brilliantly. The reader is made to feel confused and lost within the psyche of a young man left to stand alone in a contradictive world, a world in which you are told you are an adult, yet your parents still have a say, making the entire transition from graduate into adult a lot like a very difficult, tedious and painful birth.